Currently  the archeoParc is closed, the next opening day will be April 1.

Where was Ötzi found? How did he live? These questions as well as other similar ones are posed by the exhibitions in the museum and in the open-air area of the archeoParc Val Senales. As is the case with many archaeological open-air museums, the structure manages to provide the answers practically without any original archaeological finds. Rather, it depicts faithful copies (replicas) as well as conceivable reproductions and interpretations of the finds.

The exibitions in the visitor’s centre

In July 2017, with the opening of “The discovery” and “Primitive? Skilled!”, the second generation of exhibitions was inaugurated in the archeoParc. They tell the story of the discovery of Ötzi, as well as how he and his contemporaries may have lived 5,300 years ago. “The valley where the Iceman was found” in the entry area shines a spotlight on the history of the Val Senales, while “The discovery site at Senales-Giogo Tisa” then presents the hollow in the rocks in which Ötzi was discovered. Those who are responsible for the arrangement of the indoor exhibition route are archeoParc Director Johanna Niederkofler, architect Brigitte Kauntz from Merano, graphic designer Ganesh Neumair from Lana, and partners from both within the country and abroad. The main focuses of the exhibitions include the activity area (indicated in the list below with //), which invites visitors to contemplate questions which may in fact remain unanswered forever, and media stations with contents which change annually and which are oriented toward return visitors who are interested in going further into depth. In addition to the standard texts, the exhibitions also contain compact information for those visitors who may be in more of a hurry, as well as word-image texts in story form for children of elementary school age.

Tours through the exhibitions are held every Sunday at 3:00 P.M. and may also be reserved for any desired time.

The valley where the Iceman was found

How the Senales Valley developed through the ages is told by five niches with exhibits and texts on the local history, archaeology, and geology. Large-format landscape photos with applied graphics form the rear walls of the niches. They are reminiscent of the experience of dreamy views through the window – and into bygone eras.

The discovery
The events of 19 September 1991 and their consequences

Through the use of exhibits and texts, the small exhibition area presents the discovery of Ötzi and his fascination for research and society:

Primitive? Skilled!
Life between the valley floor and the ice line 5,300 years ago

Reproductions of a selection of around four hundred archaeological finds from Senales Giogo Tisa ridge form the main focus of the exhibition on Ötzi’s habitat. It deals with plants, animals, and rocks which supplied the raw materials for his clothes, weapons, and tools, as well as with the Stone Age knowledge concerning the selection and processing of these raw materials.

The discovery site at Senales-Giogo Tisa

The discovery site of Ötzi lies in a gully directly on the main ridge of the Alps at an elevation of 3,210 m (10,532 ft.) above sea level. How difficult was the recovery operation at the time, and how was it ultimately determined that the discovery site lay within Italian territory and not in Austria? You will see a 1:3 scale model here of the hollow in the rocks in which Ötzi was found.

At different locations along the exhibition route, video and audio stations invite the visitor to go further into depth in a variety of topics. Experts present their current research projects, demonstrate old handicraft techniques, and answer interview questions from children:

Good things come in small packages. We have 40 sq. m (430 sq. ft.) available for special exhibitions. Here we have the possibility of showing something new from time to time to a full one third of our patrons who are return visitors. This allows us to go further into depth with regard to Ötzi and his times.

The good spirits behind the temporary exhibitions are usually a guest curator, Museum Director Johanna Niederkofler, and our own house technician Siegmar Gamper. 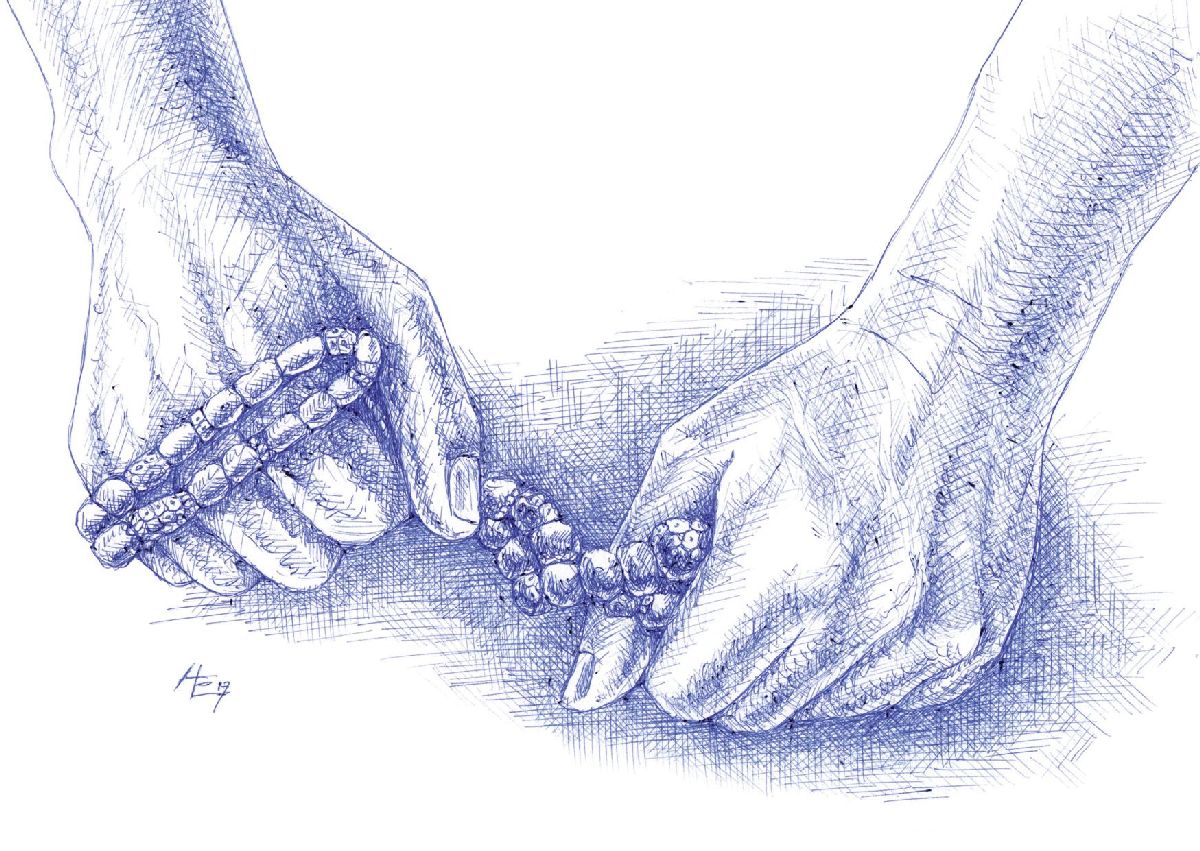 For this year’s exhibition in the archeoParc cafeteria, Lageder deals with the subject of the hand. Hands that scribble, make things, pray, or do nothing… Hands that wait. Hands in an interplay between activity and passivity. Hands that think and hand that do not think. Lageder’s works come into existence for the most part at locations where extensive activity hardly exists: in sick beds, or in the waiting rooms at doctors’ offices. They are the hands of ill people and the hands of helping people – of people whom Lageder has encountered as a result of her social engagement and her personal health history over the past years.
Next appointments:
>calender

In the open-air area, which is accessible from the second floor of the Visitor’s centre, in addition to nine Stone Age house models and an instructional path on trees, there are also thematic stations as well as areas where visitors can try out Stone Age activities themselves: the visitor workshop, the archery range, and the dugout dock.

A large section of the area has undergone various reorganizations since 2001. The “Alpine Valleys” and “Po Valley” house groups were inaugurated in 2017 and 2018-19, respectively.

The nine actual-sized Neolithic house models are based upon archaeological finds from inner-Alpine valleys, the wetland settlements at Lake Constance and Federsee lake, and from the Po Valley and have been constructed to the greatest extent possible with the same materials that were used with the originals. In parallel to their education use, some of the houses function as a sort of test in practice for researchers in various archaeological disciplines who have to completely manage without any use of modern-day materials. They are indicated in the area with the symbol of screw with a line through it.